Unique hydroelectric power plants in Podbrezová. They turned technology into a historical gem

They are over one hundred years old and even though they look like technical monuments; they still are working in the original mode. Despite the fact that they are "only" pieces of metal or brick walls, they are literally pieces of art. Nestled in the countryside, they withstanded the war and regime change. Unique small hydroelectric power stations in Podbrezová. The article was published in the HN magazine, whose current issue can be found inserted in the HN magazine in kiosks until the end of the weekend.

From the outside, it looks like a stylish house from the thirties located in a remote area at the foothills of the Low Tatras. Large arched windows suggest that inside something else is going on. We are standing in the front of a small hydroelectric power plant “Jasenie” and under the roof an impressive rhythm of foursome of turbines make knocking sound - two large ones, to which a huge rapidly spinning flywheel is dominating, and in the background two small ones that essentially function as dynamo to provoke the big ones. Despite the fact that these are massive machines, they radiate a specific beauty of industrial monuments dating back to the beginning of the last century. However, make no mistake, even though they have the appearance of museum exhibits, five thousand revolutions per minute, and in particular, the amount of energy they produce, it is a proof that they definitely do not belong to scrap iron. Together with the other seven sisters (and one gas cycle plant) - they are providing one quarter of the energy the Železiarne Podbrezová consumes. 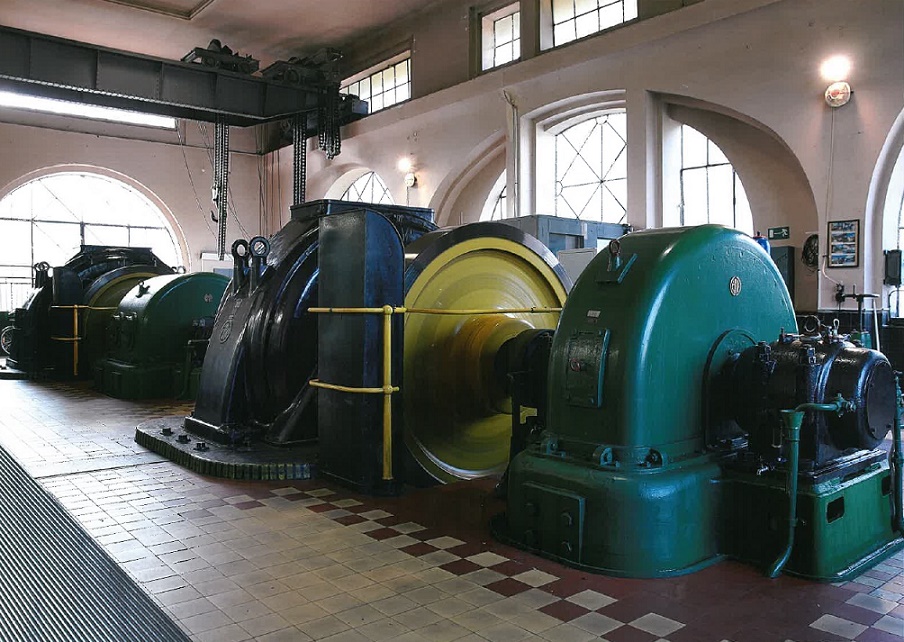 Water, energy and the beauty
A remarkable set of small hydroelectric power plants in Slovakia is unique. Namely since the 50s of the last century a large part of these buildings disappeared under the guise of collectivization and construction of large installations. Moreover, the local ones are from 92 to 108 years old and the vast majority of their equipment they contain is just as old. Moreover, they do not have dams crossing the river, but skillfully collect water from the nearby streams and brooks into itself. We are talking about three small hydroelectric power plants - Piesok, Dubova and Jasenie. When in 1840 the ironworks, which processed the local ore, was founded, electricity was more or less a laboratory "playground" of scientists rather than a helpmate. However, gradually has found its way into the industry and of course also to Podbrezová. "The surrounding rivers and the Hron River had great hydro potential hidden in itself.
Therefore, an idea also came up to build small hydropower plants here, "explains Technical Director Železiarne Podbrezová Mr. Lubor Schwarzbacher". Thus, at the beginning of 20th century the construction of weirs began in the vicinity, collection channels, and, of course, power plants themselves. As the first to be finished was in 1908 the construction of the Piesok power plant and one year later Dubová has been added and after the first World War in 1924 also the largest and probably the most beautiful Jasenie. Just for the record, let us add that in the 90s Predajná and Jasenie II were added.

Not even grenades could destroy them
ut let's return to the historical beauties that are skillfully interconnected by a network of canals and pipelines in such a way that the same water will pass through all of the them five times thus gives all of its strength five times. "Channel collects the water and pulls it into the water reservoir called Rigel, which is about two hundred meters above". Mr. Jozef Cernan, the head of power engineering shows us the building on the hill above us. From the water reservoir, water goes through a massive pipeline to the power plant Jasenie. At the end of it, the water pressure achieves an impressive 20 bars, which is enough to spin up the already mentioned four turbines. Their quality is evidenced by the events from the end of World War II. "When the Germans wanted to blow up the water reservoir, grenades and explosives did not leave nearly any scratches on the massive concrete shell," says Mr. Cernan, adding, that if they managed to accidentally shoot through the pipeline, water was spraying up to thirty meters in height. We admire the massive turbines on which not much has changed since the blades were assembled here in 1928.

A marble as an insulator
The same awaits for us in Dubova. With the difference, that one of them had to be replaced in 1975 by a newer one from Banska Bystrica. In addition, another rarity is waiting there for us, which is - the marble control panel. Although it is already standing by itself because it was replaced by a more modern one, but Mr. Jozef Cernan in his spare moments and with his colleagues is trying to return it to the original functionality. On the hill above, the power plant has one more interesting fact: a guardhouse from which they used to monitor the weather, whether a storm was on the horizon. If they saw it coming, they had to turn off the facilities, in order to avoid short circuit by a possible lightning.
Usually we are reluctant to leave the place filled with such a history because the ordinary mortals do not have a chance to come here. In fact, the power stations are still fully functional and strict security rules apply here. At the same time, we are delighted that you have been able to look into them least for a while, thanks to the HN magazine and have a peek.